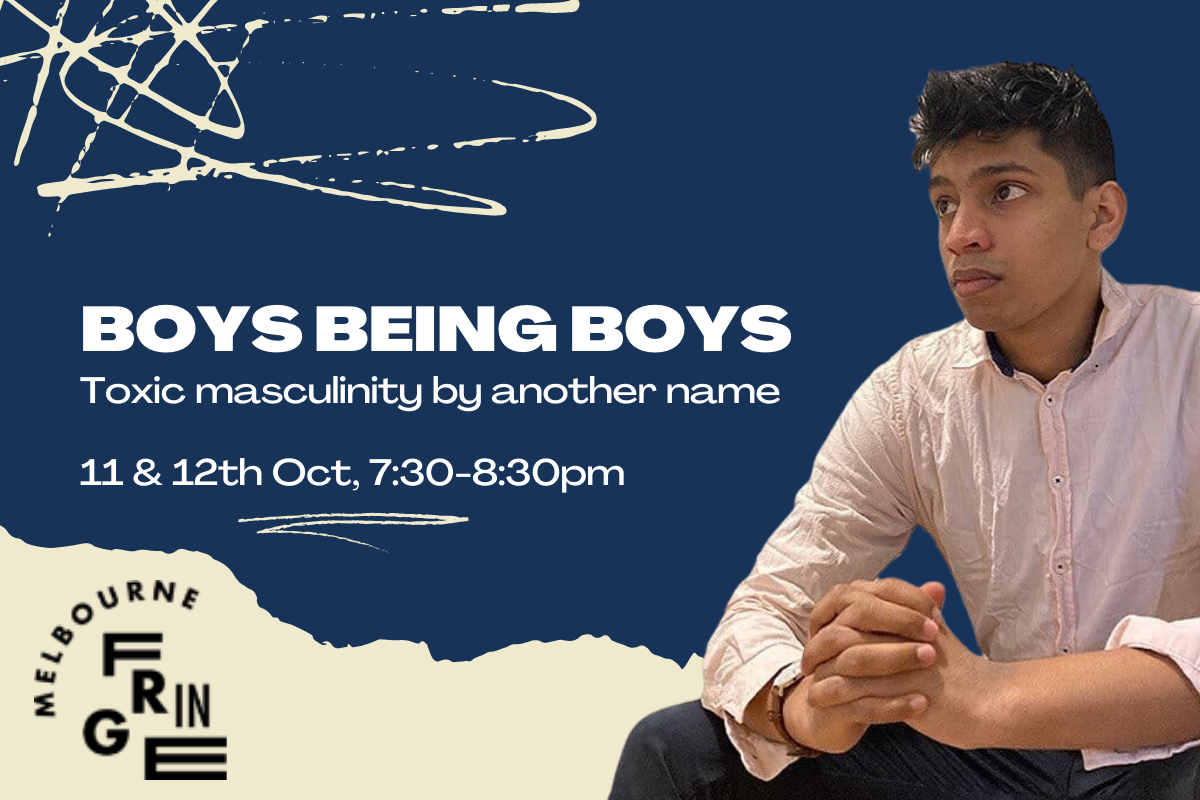 I’m still in my university days, studying medicine at Western Sydney university, eager to make my way about the world, after climbing the eternal mountain that is education and study. I’m a brother of two younger sisters, also trundling up that mountain in their secondary school years. I’ve tried my two hands at the piano, and I’m revelling my time in the arts scene. I’m an every-now-and-then player of sports, if you can call fiddling with my backyard soccer ball a sport, with a recently cancelled gym membership for failure to attend. So to sum it all up, at the end of the day I am, essentially, a quite ordinary male. A boy.

From my experience, being a boy, isn’t as innocent and playful a title as it may seem. In my adolescent years I’ve seen the peaks and troughs of brotherhood. I’ve been a part of it, I’ve enjoyed it, and I’ve reflected on it to learn that there are so many things awful and despicable things about the institution of brotherhood, distilled in casual statements like ‘boys being boys’. Watered down statements that make that slippery slope of careless sexism and misogyny, all the more slippery. I’ve seen glimpses of the car crash that comes from the so-called innocent choices we start to make when we’re twelve, when we find our crew, our guys, ‘the boys’, and we find an acceleration so great, we don’t ever want to stop. Because toxic masculinity is almost indistinguishable from the chest-inflating air of brotherhood.

And so it never does stop, from the sly glances shared with his friends when a girl walks past, to the underhand, under-desk conversations about their teacher, non-consensual catcalls and howls that reveal a nature that is anything but human. All of this occurs under the guise, and in defence of a joke, of a simple, no-dramas, conversation. But locker room talk is misogyny; disdain to the queer community is homophobic; staring eyes are predatory; and pathetically justified displays of affection are assault. And the notions that permit such actions, sentiments such as brotherhood need to be dismantled. Because it is not, boys being boys, it is the reason why one in three women experience abuse. Boys being boys is far too kind.

Just like it’s too kind to say that I’m just a troubled witness to this male-infected poison. I, in being present, in nervously smiling away the crude conversation, in not overtly calling out the wrongs, am equally guilty for the consequences. Because doing nothing doesn’t cut it. There is no bear minimum when it comes to tolerating sexism, because it is, intolerable full-stop.

Which is what drove me to write this play, to hopefully, slowly, do something constructive and helpful in terms of resolving the onslaught of gender inequality that is planted by toxic masculinity. And I hope it’s an agenda that gains traction and momentum, perhaps even a momentum someday large enough to oppose the gravity of that slippery slope.

I’ve realised from my university experience in performances and revues, the power of theatre and the arts to deliver, real, in-your-face messages. And as an audience member I’ve felt the transformative power that is spread in the space of theatre. This project was borne out of my desire to unite my love for drama and it’s catalytic nature, with my deep frustrations with toxic masculinity and my part in it. Creating this piece has been incredibly insightful for me. It has taught me to reflect and grow, so that end of the day, I am a man, but a man who’s hopefully learning to be a better one.

Niranjanan Sriganeshwaran will be performing in his debut one person play, ‘Boys Being Boys: Toxic Masculinity by Another Name‘, at the Rubber Chicken in South Melbourne, as part of the Melbourne Fringe Festival. Sessions happening from 11 & 12th Oct, 7:30-8:30pm. Tickets >

All proceeds from ‘Boys Being Boys’ will be donated to Safe Steps.