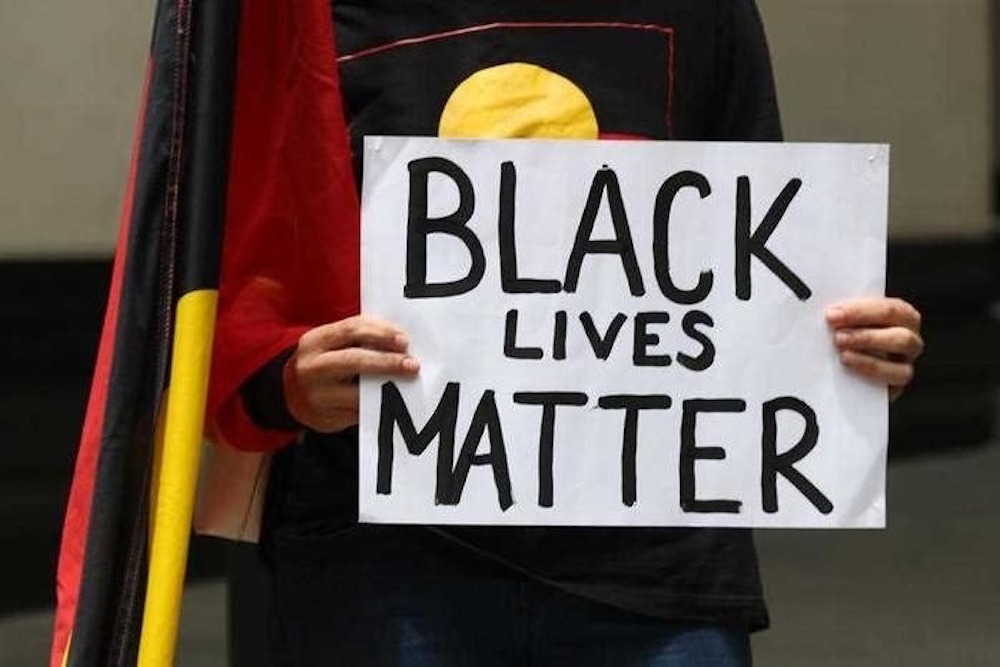 “When we identify where our privilege intersects with somebody else’s oppression, we’ll find our opportunities to make real change.”
– Ijeoma Oluo, author of So You Want to Talk About Race

“The resounding call for truth-telling was at the heart of the Uluru statement, we are seeing it in treaty processes across the country, and in the protests and vigils which yet again are demanding justice and truth for too many lives lost in custody.”

For nine minutes, the white police officer knelt on the neck of George Floyd and killed him. Mr Floyd was a lover of music, an athlete, and a father. A few weeks earlier we saw the footage of a former white officer, and his son, shoot dead a young black man as he went for a jog. These two deaths are part of a horrible and violent litany.

And then, there is the recent viral video of a white woman, Amy Cooper, calling the police in fake distress when a birding enthusiast, a black man, dared to call her out for letting her dog roam off leash in a public park. This revealing interaction is part of a continuum of white supremacy.

It is little wonder that America has gone up in flames – black hearts and souls wrenched yet again. Tempers flaring, cars and buildings in flames, people wounded; so much anger, distress and pain. This is a nation which has never found a way to reconcile its racist past, and escape from the shackles of white supremacy.

It is no accident that America’s venally incompetent President Trump, exhorts US State Governors to ‘dominate’ the protests, ‘get tougher, ‘you have to dominate or you look like a bunch of jerks’. Trump’s belligerent posturing is precisely what shackles American society — white hegemonic domination at the expense of racial fairness, justice and equality for all.

Watching these gut-wrenching images and stories and the justifiable anger on the news, we must remember the systemic racism that persists in our own country.

As another Reconciliation week comes to a close, we note there have been over 420 Aboriginal deaths in custody since the end of the 1991 Royal Commission. Last week mining giant Rio Tinto blew up 46,000-year-old Aboriginal caves in Western Australia for profit.

Just yesterday footage emerged out of Sydney of a teenage Aboriginal boy having his legs kicked out from under him by a white police officer. He fell face first. If this is how police officers behave towards Aboriginal boys on camera, it begs the question: how violent are they when the cameras are turned off? Furthermore, we would be hard pressed to find similar footage of a white boy in a private school blazer treated with the same casual violence.

If we are to move forward as a society, we must confront the deeply embedded, persistent stain of racism on our own shores. The land on which we work, sleep, gather and live was stolen by force, and it started the day Captain Cook fired his musket at Indigenous people after stepping onto their land. We must reconcile with the violent dispossession of our past and the ways it continues to inform our present day.

We also have to maintain hope and sharpen our activism to achieve a better world, free of racism.

But we have to do the work. That means educating ourselves; talking about racism and white privilege with our families and communities; amplifying and supporting the voices of anti-racism activists and changemakers. And we have to continue to turn up, even when it’s no longer front page news or trending on social media. We are the ones who must make the changes in our lives, our workplaces, our communities.

“Change is possible when you tell the truth, or when you listen deeply and enable truth to be brought to the surface. The more truth is told, the more support for truth grows in this nation. Truth-telling can shift expectations and perspectives.

Truth-telling is hard work. But the power of truth-telling is in its process, where grief makes way for healing, and healing unites people who once were divided. It is my experience that behaviours and actions change when people come to know another reality.”

Our volunteers and staff have compiled a list of books, podcasts, activists and more from Australia and beyond to support anti-racism self education. If you have a suggestion to add to this resource, email women@vwt.org.au