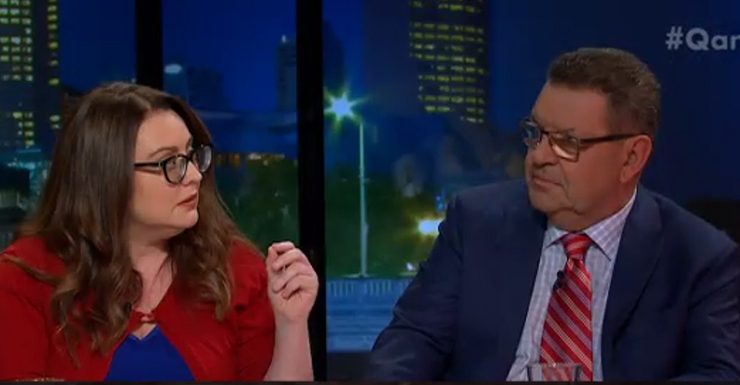 In case you missed the controversy over Steve Price’s comments on Q&A last Monday, here is a brief recap:

Audience member, Tarang Chawla, addressed the panel with the following:

“Sam Newman has courted controversy yet again for defending Eddie McGuire, who “joked” about drowning Caroline Wilson. I work as an Ambassador for Our Watch. Male violence is the leading cause of death and disability for women in Australia. My sister Nikita was [killed] by her partner in January 2015. She was 23. How will politicians and the media play a better role in bringing about long overdue cultural shifts so tragedies like mine are not normalised?”

Steve Price decided to respond to Tarang’s eloquent question by not actually answering it at all, instead he chose to defend his mates Eddie and Sam, referring to them as ‘blokes just having a laugh’.

Van Badham, feminist writer for the Guardian, responded with real human feeling. She offered her condolences to Tarang and suggesting that Steve might not understand the effect these ‘harmless jokes’ have on women or their link to misogyny and violence against women. Steve then promptly lost the plot. Click here to watch the full video.

Steve’s complete lack of empathy towards Tarang, who opened up about a very personal family tragedy in order to shed light on violence against women, was appalling. Second to that, his treatment of Van Badham perfectly highlights the exact outdated attitude towards women that Tarang wants to change.

The irony of a man seemingly unaware that he is openly disrespecting a woman who is talking about respecting women is laughable. As if this isn’t enough the same visibly agitated, irrational and hissy-fit-throwing man calls the same calm and collected woman ‘hysterical’.

Let’s just (do a Steve Price and) take a step back in time to look at the long gendered history behind the term ‘hysteria’.

The term originated from the Greek word “hystera”, meaning uterus (making it without a doubt a gendered word from the start). It was believed that the ‘wandering womb’ could become displaced within the body, causing women to become irrational and emotional. Aristotle, the Greek Philosopher, used the idea of hysteria as a principle reason why women were unfit to participate in the politics or city-state. Given that this is a philosopher who also stated “the woman is a failed man” I’m calling bullshit.

Though today this concept seems completely out-dated and ludicrous, the American Psychiatric Association didn’t actually drop the term until the early 1950s, nor did it disappear from the DSM (Diagnostic and Statistical Manual of Mental Disorders) until 1980. Though the theory of the ‘wandering womb’ was disproven centuries ago, the symptoms and consequences of hysteria were still believed in for a very long time. The term was coined in an attempt to control the lives of women and prove their inferiority to men. This attitude is still very much alive today.

So when Steve Price labels Van Badham ‘hysterical’ he is dismissing her opinion as invalid on the grounds of irrationality and hyper-emotion. He continuously interrupts and talks over her throughout the program in an attempt to silence her female perspective. However, Van speaks so truthfully and eloquently about the issues surrounding domestic violence, that Steve resolves to his last resort of using this age-old insult to discredit her. Luckily, Van is a woman of dry wit and had the perfect comeback, “it’s probably my ovaries making me do it, Steve.” Go Van!

At no point throughout the program is the prominent AM radio broadcaster and The Project regular guest host subtle about his complete disregard for Van’s opinions and experiences. And his specific use of the gendered insult “hysterical” makes his overall view of women unmistakably clear. If Price was having this debate with a man, no matter how angry or irrational the man became, there is no way Steve would label him hysterical.

Many people would be unaware of this history behind the word and why it so offensive, but I don’t believe Steve Price is one of those people. I believe it was a deliberate attempt to undermine the credibility and intelligence of his fellow panelist. This just goes to show his complete lack of understanding of the female experience, of constantly being on the receiving end of an ingrained sexist culture which normalises the mistreatment of women – which is exactly what Van Badham was saying when Steve Price so rudely interrupted her with the said word.

This blog post originally appeared on the Rosie Blog and was written by Maddy Crehan on July 13, 2016. Maddy regularly writes for Rosie, and is passionate about music, history, art and gender equality. Please click here to view the original post.

Sexual assault and rape culture continues to be one of the most confronting and difficult topics of feminist activism. One of the lesser talked about topics within this is sexual violence towards sex workers. We love how her words is amplifying the voices and lived experiences of women to increase understanding and move forward on the pathway to change.