Lindstrom’s work depicts, ‘a woman, standing defiantly, ready for battle with both hope and heart’. 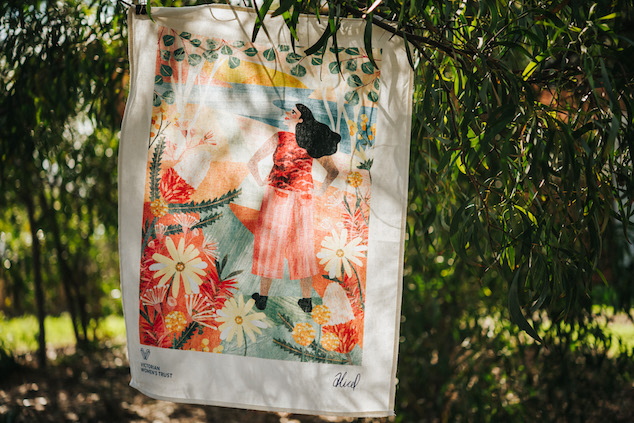 Well, this is pretty darn exciting! After months of secret scheming behind the scenes, we’re finally ready to show you the joyous artwork Alice Lindstrom has created for the Victorian Women’s Trust, available now in the VWT Shop.

Based in Melbourne, Alice’s work forms the centrepiece of our end of year fundraising appeal, When She Rises, We All Rise (donate here). Alice is a maker with a passion for representing women in all their diversity. Her collages offer a glimpse into worlds of possibility, gracing children’s books, tea cups, cards and countless walls.

And now, lucky for you, Alice has turned her expansive talents towards creating a VWT artwork that fits our vision for women and girls. Screen printed locally on linen/cotton, her work is available now as a tea towel in the VWT Shop, just in time for silly season. Best of all, every purchase directly supports our work in creating a brighter future for women and girls.

We spoke to Alice Lindstrom about her artwork for VWT, makers who inspire her own practice, and how she deals with feminist backlash. Read on.

Victorian Women’s Trust: When did you first realise that gender inequality existed?

Alice Lindstrom: At kindergarten when I was told by the kindergarten teachers that I needed to ‘wear a nice dress’ for the group photo (the boys weren’t told that they needed to do the same). Apparently that same year I declared to Mum that ‘I wanted to be a boy’ because ‘it meant I could run and jump and do what I wanted to do.’

What underpins this artwork?

I was asked to respond to the statement ‘from little things big things grow’, which brought to mind botanical and plant related imagery, but was also particularly pertinent against the backdrop of the #MeToo movement and growing cognisance about the deeply embedded societal sexism and misogyny that still exists, despite the gains made in previous decades, particularly the 1960s and 70s. The statement related to the fact that the more we hear women’s voices and challenge embedded patriarchal attitudes, the more possibility for continuing change and reckoning. 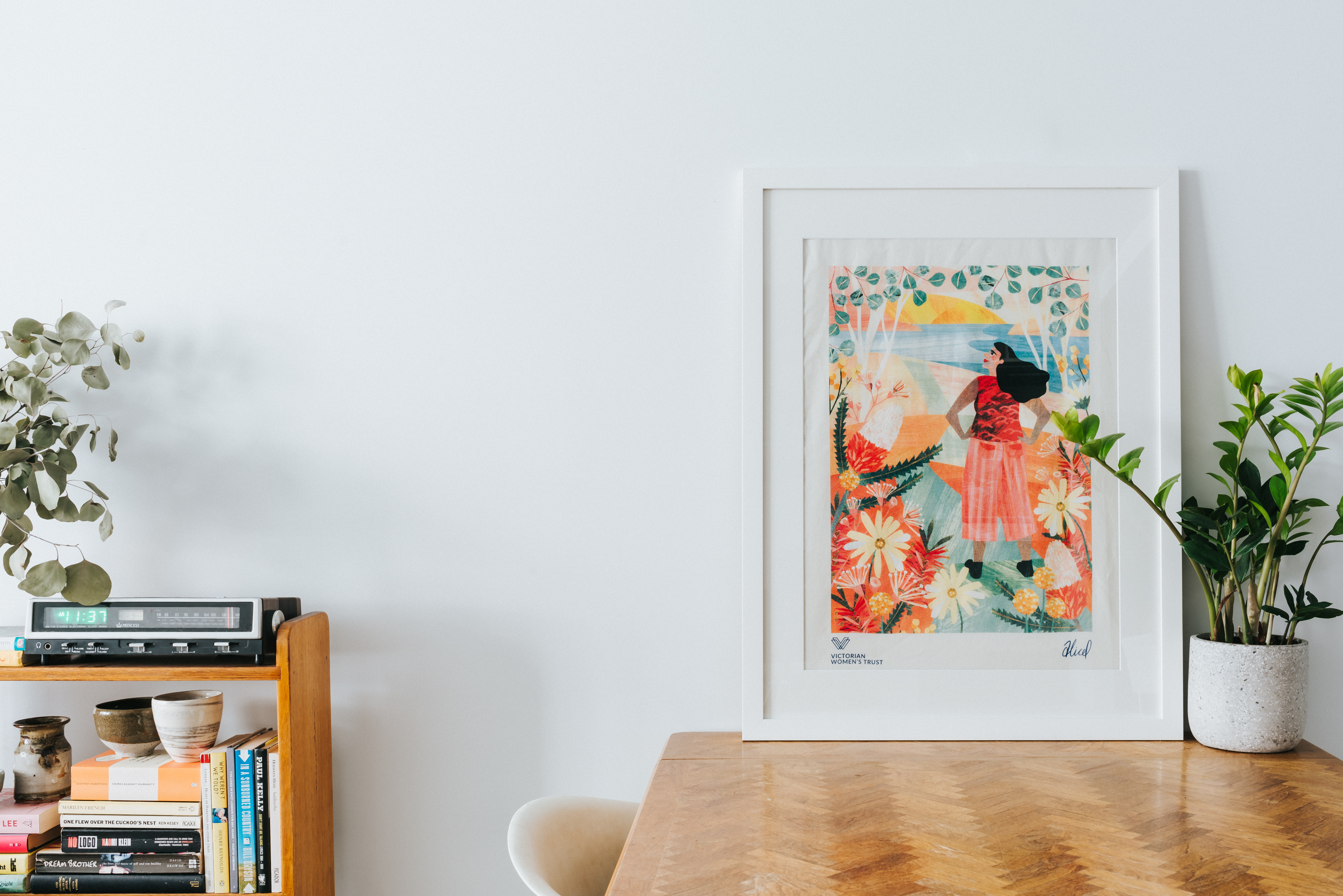 Additionally, I had Madison’s poem* to respond to and her words conjure up the image of a woman, standing defiantly, ready for battle with both hope and heart. Similarly, I want viewers to feel hopeful when they look at the artwork.

I wanted the artwork to feel distinctly Australian and show a strong woman, looking out onto the horizon and the future. Ultimately the message is a positive one, recognising that there is still a long way to go to gender equality, but also celebrating a feeling of empowerment and optimism for ongoing change. 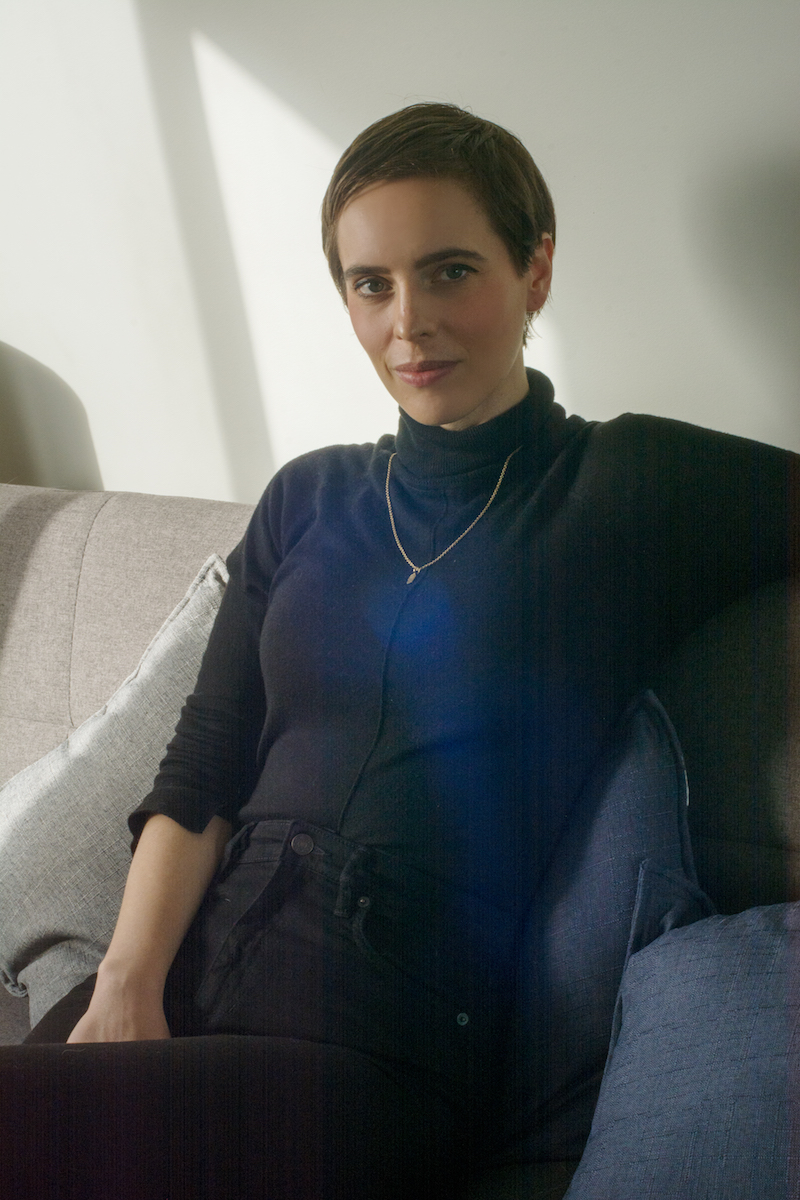 As issues relating to gender equality gains traction in the mainstream, so too does backlash and resistance. How do you deal with resistance?

The resistance can be very demoralising. On the other hand, it is not surprising. Any threat to the patriarchal systems that have been in place for centuries and that have oppressed women, LGBTQI and people of colour are deeply destabilising to the established power structures and people profiting from those power structures.

I deal with the resistance by talking about it with my friends, family and peers and trying to find the courage to call out sexism in my everyday life, when I see it happen personally.

I’m heartened by the fact that by and large, it seems that we are moving toward a world where gender inequality, sexism, misogyny and sexual violence is increasingly called out and named for what it is, even if we are not at a stage where it is prevented from happening.

Which artists inspire your creativity?

I am particularly inspired by historical women artists who often had to contend with huge gender based obstacles and yet committed to their work and created it regardless. They had to renounce narrow societal expectations and frequently had to deal with dismissal, suspicion and exclusion by the art world. Hannah Höch, Frida Kahlo (whose work was initially negated until the later years of her life), Gabriele Münter, Nancy Spero, Suzanne Valadon; the list is countless. Their work and their lives inspire my commitment to creativity everyday. 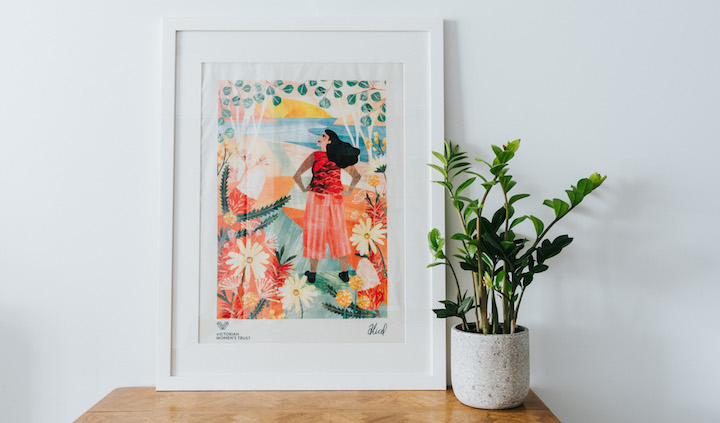 Give a gift that gives back

Snap up a Alice Lindstrom x VWT tea towel, specially made for the VWT community. Screen printed on linen/cotton, this is a must have for all the dishy people in your life. All funds raised supports our work in advocating for a brighter future for women and girls.