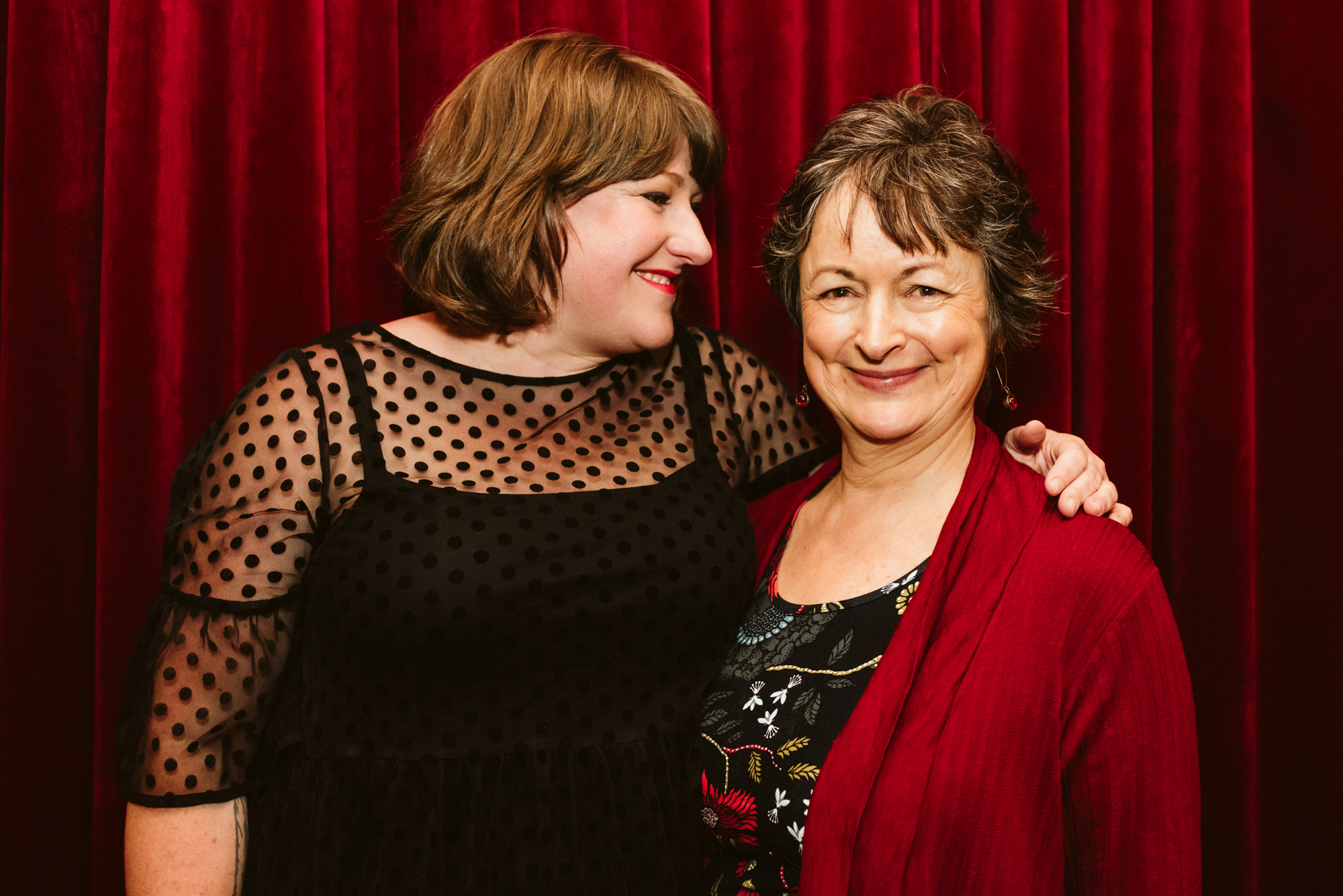 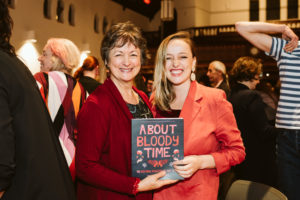 Our new book, About Bloody Time: the Menstrual Revolution We Have to Have, written by Karen Pickering (feminist organiser) and Jane Bennett (menstrual educator) has officially been launched through a series of community events around the state of Victoria.

The first book launch took place on Wednesday 5 June at the Church of All Nations in Carlton in front of an audience of over 200 people. Held in partnership with the Readings Foundation, this event marked the end of a highly successful six week Pozible campaign towards the publication of About Bloody Time.

Thanks to the support of like-minded members of the community, our crowdfunding campaign raised a total of $31,327 — more than double the original target.

The Carlton launch also signalled the end of many years of research and writing. During this period (pun intended) the Trust surveyed almost 3,500 women and girls about their experiences of menstruation and menopause. The goal was to uncover the many permutations of the menstrual taboo; the ways period stigma affected people’s lives; and how we may better support those who menstruate. This research process began in 2013 and in the years that followed, authors Karen Pickering and Jane Bennett wrestled with the emerging data and what those findings meant for society at large.

About Bloody Time unpacks these findings in detail, asking key questions like what would make their period easier and how prepared they were for their first period. Shockingly, the meter hasn’t shifted much over the last fifty years, as over half of the women surveyed (ranging in age from 12 to 46 years) felt unprepared for their first period and 42 per cent of those surveyed, in all age groups, either ‘disliked everything’ about periods.

Stats such as these have been picked up by the media, resulting in an interview on Life Matters on ABC Radio National and Triple RRR, requests for thought pieces in The Guardian and Whimn, articles in regional outlets like The Courier, The Bendigo Advertiser, and others, as well as an outpouring of warm sentiment across social media. It seems that About Bloody Time is the kind of book that people have been waiting for.

But back to the launch in Carlton. The evening began with a stirring Welcome to Country from Leanne Miller, proud Yorta Yorta woman, Executive Director of Koorie Women Mean Business and Victorian Women’s Trust Board Member. Leanne spoke of how pleased she was to be associated with About Bloody Time and the significance of this work. Alana Johnson (Chair, Victorian Women’s Trust) followed on from Leanne to usher in Clementine Ford. 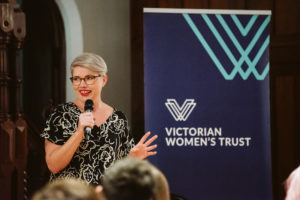 “It’s such a thrill to be here,” said Clementine, feminist writer and foreword contributor to About Bloody Time. “I’m so excited that I began menstruating today.”

When asked how people responded when they learned she was writing a book all about periods, Karen laughed and said, “People seem to be really divided. Either I’m a crazy period lady because I have so many conversations about menses or I’m really tame because I’m not gardening with it.” 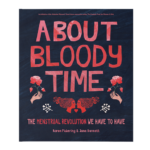 Available now! Buy a copy of About Bloody Time: the Menstrual Revolution We Have to Have ($30.00) by Karen Pickering & Jane Bennett online via the VWT Shop.

“ABOUT BLOODY TIME should be on bookshelves everywhere: I only wish it had been on mine when I was younger” – Clementine Ford

Holding up the book, Mary asked Jane to reflect on the significance of chapter two of About Bloody Time, The Biological Integrity of Menstruation. Why was such a large portion of the book dedicated to the mechanics of the menstrual cycle? 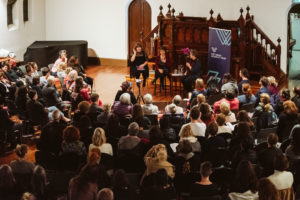 “All stages of the menstrual cycle are beautiful, are natural, are so full of integrity, but we don’t get a sense of that because everywhere we turn, we’re told it’s disgusting,” said Jane. A self confessed “period nerd”, over the decades Jane has conducted endless menstrual workshops and educational programs, making this kind of discourse her home ground.

As she spoke, the awe Jane holds for the menstrual cycle was clearly evident; further reason why this chapter was so integral to undoing ingrained biases and stigma. We need to reclaim a sense of wonder about our bodies and Jane is precisely the right person to help us do that.

But exactly how does this fit into feminism? How will unlocking the menstrual taboo achieve gender equality? Karen had a quick answer.

“If you believe all genders should be equal, you shouldn’t believe that half of people being taught to feel disgusting and mistrusting of themselves is normal,” said Karen. “Even if only temporarily, how does that hold a person back? And how is that holding us back as a society?” 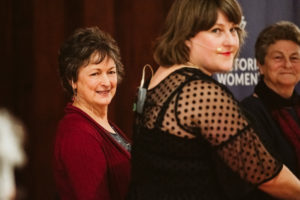 Mary acknowledged that the pairing of Karen Pickering and Jane Bennett was in some ways “weird” but when once you overlay the experience of each author in a venn diagram of sorts, it’s obvious that this is was a smart play. Where Jane has deep menstrual knowledge and understanding, Karen is charged with feminist theory and activism. Combined, they have the very real potential to spark a revolution in the way we think and feel about periods.

“We [the authors] were coming from very different experiences, writing journeys and generations as well,” said Karen. “But the whole way we had the utmost respect for each other and one another’s perspectives. And the book’s all the better for that”.

The night ended with round after round of thunderous applause, as Mary paid homage to members of the original Advisory Group who were instrumental in bringing About Bloody Time to fruition, such as Katherine Cunningham (Living Gently); Jane Hardwicke Collings (School of Shamanic Womancraft); Duré Dara OAM (Board Member, Victorian Women’s Trust), and most especially Belinda (Bindy) Gross, our inaugural donor. 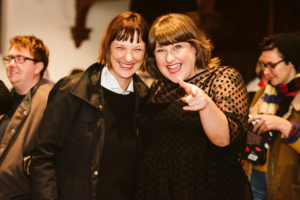 Mary also gave thanks to all 675 supporters of our Pozible campaign, as well as TOM Organic; School of Shamanic Womancraft; Vasudhara Foundation; Heimot Cayuse; and Plan International Australia; without whom this book would not have been possible.

“The baby with many mothers. This book is a labour of love”, said Karen.

Following the Carlton event, a further three book launches were held in Ballarat, Bendigo, and Castlemaine. The latter was also sell-out event, proving that people in the city and regional communities are more than ready for a menstrual revolution. Our task now is to continue amplify period positivity by sharing copies of About Bloody Time with everyone we know.

About Bloody Time: the Menstrual Revolution We Have to Have is now available for purchase via the VWT Shop.

Thrilled to be at the #AboutBloodyTime launch last night 📚

The book is beautiful & it’s message is vital – the #menstrualtaboo holds people who menstruate back & a menstrual revolution is 🔑 to unlocking gender equality.

So excited to get stuck into this book and join the #menstrualrevolution after hearing the amazing Karen Pickering and Jane Bennett last night at the #Ballarat launch @bmiballarat Thanks @VicWomensTrust for taking the initiative on such an important project. 👭♀️ pic.twitter.com/q3DLKmx3Fv

At #Bendigo launch of #AboutBloodyTime, an important book on menstruation which needs conversation, knowledge and understanding. @VicWomensTrust pic.twitter.com/lXGNHP0cSR 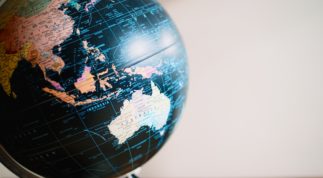 Menstrual Activism is Taking Over the World

A new wave of period activism is a-flowin’ (ha) around the world. High on the agenda is tackling period poverty to support  the millions of... 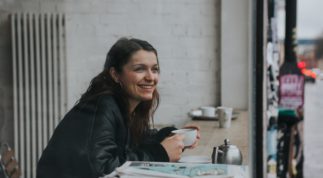 Why we've introduced a menstrual policy and you should too

The VWT has been trialling a menstrual leave policy and it’s been a great success. VWT staffers Casimira Melican and Grace Mountford explain the importance of contemporary and progressive workplaces in supporting people who experience menstruation and menopause. 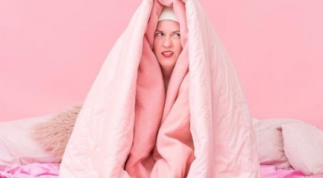 Aimee Carruthers is the kind of lady who wears many hats, and boy, does she wear them well.